Five years ago, we initiated, in partnership with other manufacturers, National Ceiling Fan Day (NCFD)—a day to mark the importance of ceiling fans to energy consumption and air movement… and also to enjoy some cake. 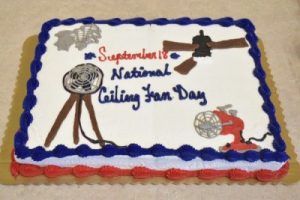 This tradition continues next Monday, Sept. 18, with the 5th annual National Ceiling Fan Day. NCFD has become a collective effort to power down cooling systems and rely on fans to potentially save trillions of kilowatt hours of energy consumption. Together with the American Lighting Association (ALA), energy conservation groups such as the EPA’s Energy Star Program and thousands of retail partners, we’ll mark the day with fan education, a challenge to conserve energy and—as a bonus—a retail discount on our products.

First, here’s why you should care about NCFD:

With advancement in technology, today’s ceiling fans are capable of even greater energy conservation than their predecessors. Many of today’s fans feature energy-efficient DC motors, which consume as much as 70% less energy than their non-DC motor counterparts. Plus, several have earned the coveted ENERGY STAR rating, proving they are among the elite in energy conservation technology.

If every American participates in NCFD by turning off their AC and using fans for their cooling needs, the United States will save enough energy to power the entire city of New York for months. So, help us reduce energy consumption by turning off your central cooling systems and staying cool with ceiling, floor, desk and wall fans to save trillions of kilowatt hours of energy consumption.

Icing on the cake:

As an extra incentive to participate in the energy-saving effort, many fan retailers are offering discounts to consumers in conjunction with NCFD. At Fanimation, we are offering 20% off our retail prices on all products between Sept. 15-19. The discount is valid at our participating lighting and fan showrooms or online retailers.

Join us this National Ceiling Fan Day! Cool down, save money (and energy) and eat your cake, too.