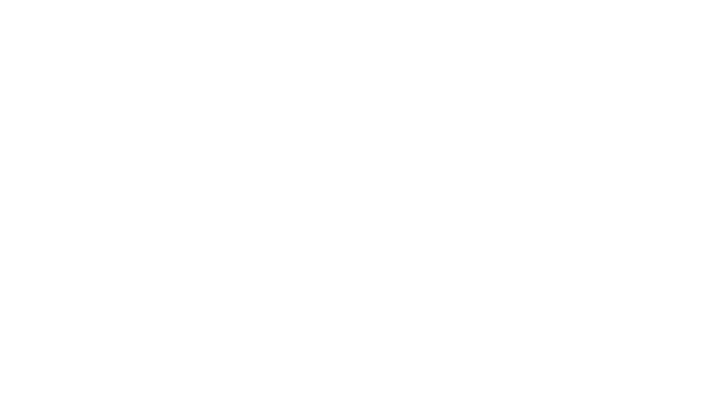 Hello everyone out there in bloggerland, I just got back from vacation and I am happy to report I’m safe and sound. I had an amazing time at the 500 weekend and in Florida. I saw everything from alligators to drunken pirates to race cars and it was all one great big experience. However, I found myself wanting to be back here near the end of it all. I guess I really do love my jobs, otherwise I think I would have dreaded it.

Before I left for vacation though, I got to be involved with the Indianapolis Yellow Party, which is a cancer fundraiser held during the Indy 500 festivities. I got to be involved because I was asked to paint a fan in the same colors as Indy Car Driver Alex Tagliani who drives for Bryan Herta. The fan was to be put into the silent auction, which was night’s main event. It was an amazing experience.

I walked in and felt a little awkward at first because in the mass confusion of so many people, they couldn’t find my name on the list, but luckily in-swooped the party planner, Elizabeth Wertz, to the rescue. She led me in and I saw the party as it was just beginning. I immediately found my fan, placed among the other silent auction items, and noticed people had gathered around my fan, taking in the great detail I put into it. I am pleased to tell you, people were impressed. I had been nervous all day about how others would see it. Would it be a “novice job done, by a novice painter?” or would it be “a professional job, done by a professional painter”? I’m not sure on either one, but people seemed to be impressed with it. Other than that, it was a great experience, with women in evening gowns and men in tailored suits. It was the first party of its kind I’d ever been to, but I took it in and stayed in the moment.

Many of the Indy Car drivers were there including Alex Tagliani, who I got to meet and take pictures with. Alex ended up buying the fan and I was told he ended up giving it to Bryan Herta as a birthday present. I saw plenty of other drivers there to, including my favorite, Tony Kanaan. I’m sorry to say, I didn’t have enough guts to walk up and speak with him, let alone ask for his autograph.  But it was a great start to what turned out to be an amazing vacation. Again though, I’m glad to be back and glad to be working again.

In the coming weeks I’ll be finishing up an Antique restoration, and starting on some new ideas for the Enigma.

Don’t forget to stalk me!!! 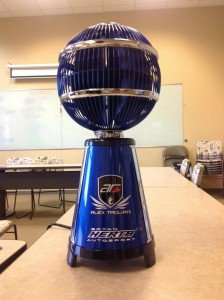 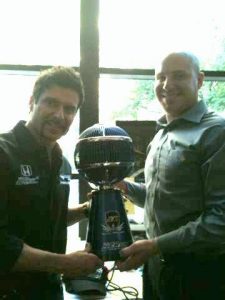